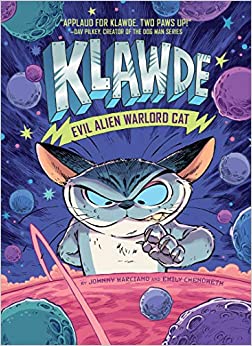 Want to track your progress on this series?

Klawde: Evil Alien Warlord Cat is a funny book series from Johnny Marciano and Emily Chenoweth about an evil emperor cat that gets exiled to Earth. Klawde finds himself figuring out his punishment alongside his human friend, Raj. The series is told from the points of view of both Klawde and Raj with plentiful illustrations throughout. Young readers will love this hilarious, sarcastic, alien cat series.